Seven day hunting packages are available for archery black bear hunts. They include accommodations, boat with 20 gallons gas, pre-baited stands, an orientation trip to the stands, tracking assistance. Additional charges for transporting hunters to and from the baits. Bear hunters must supply their own tree stands, skinning and hide preparation, meat processing and packaging. The fall season runs from mid-August to mid-September. Licenses and export permits cost about $225 (cdn) and are required when taking meat and hides out of Canada. There are between 75,000 and 100,000 black bear in the province of Ontario. Their density is about 20-40 bear per 100Km2 in NW Ontario. When they are not hibernating in the winter months, black bear spend most of their time looking for food. In April, they emerge from their dens and feed on flowers, dandelions, clover, grasses and sedges. They mate in June and July. In May and June, a bear will pursue spawning sucker, moose calves and deer fawns. Then they switch to foraging for berries, acorns, ant colonies, wasp and bee hives, and beech nuts in the summer and fall. Black bears are among the slowest reproducing mammals. Females do not produce their first litter of cubs until they are between five and seven years old. The average litter size is two to three cubs. A sustainable bear harvest must not include more than 20% adult females to preserve the population. Our hunters are required to harvest bear in a humane way and insure that none of the meat is wasted.

From September 15th until mid-October, enjoy exciting shotgun hunting for ducks and grouse. In peak years, Wine Lake Camp boasts a healthy population of mallards, ruffed and spruce grouse. For your adventure you will need to provide your own decoys and covering to make a duck blind in the marshes near the main camp. A few trails and wooded timber areas provide an excellent venue for grouse hunts. A small game license costs about $100 (cdn). Non-residents must complete a gun registration when crossing the border ($50).

Our Camp specializes in bowhunting for moose and bear. Seven day black bear hunts run from mid-August to mid-September. For those wishing to bow hunt for moose, Wine Lake has adult tags available each September in a 7 day hunting package. Guides are optional for this package. Due to the popularity of bowhunting for big game booking is extremely limited. All hunters receive a complimentary copy of Randy Eaton's video, A SACRED HUNT, which emphasizes the respectful attitude we expect from each of our bowhunters. Excerpts from Wisdom of the Elders: Sacred Native Stories of Nature, edited by David Suzuki and Peter Knudtson. "While the hunters carefully honed hunting skills are certainly likely to improve his chances somewhat, his luck - or lack of it - is deeply connected with patterns of nature that lie, dim and unseen but always acknowledged, beyond his personal grasp. Thus, if he succeeds in killing an animal, the hunter can justifiably attribute his success to a mixture of personal skill and temporary good fortune. But if he fails and is forced to walk out of the forest without a freshly dressed carcass slung over his shoulder, it is immediately clear to him that greater forces in nature have favored the life of the animal. Ontario fishing adventures, resorts hunting Photo by Helen Grymaloski The survival of the animal that his misguided arrow fails to hit can only reflect the enduring order of the vast nature of things, so the luckless hunter does not complain, "I cannot kill anymore." Instead, in his wisdom about the workings of the cosmos, he says of this day simply, "Moose don't want to die for me today." And should luck shine upon him and a moose or bear - in an expression of nature's grand design - willingly die for him, the hunter accepts this gift with humility, gratitude, and courtesy. He accepts the animal's sacrifice only because he and his family genuinely need it. And he utilizes every part of it, hoofs and marrow and hide and sinew and flex. Waste is abhorrent to him, not because he believes in the intrinsic virtue of thrift, but because the animal died for him. By accepting the warm, energy-and nutrient-laden carcass as a gift, and by honoring its willing sacrifice by respectfully handling its physical remains, the hunter confirms and revitalizes the sacred contract between human beings and kindred animals. His empathy for the elegant creature and his sense of its place in the cosmos compels him to communicate with the deceased moose and its unborn descendants with the same reverence with which he addresses his own family members and ancestors. The relationship between a traditional hunter, between human and beast, is thus horizontal. It is an ancient and familiar negotiation, punctuated by moments of joy and grief, between affectionate equals."

A seven-day bow hunting package includes housekeeping cabin, 16' Lund with 25hp Yamaha motor, gas, sport boat with trolling motor, tree stands, orientation to area and tracking assistance. A hunting license runs about $450. However, many of our outdoor enthusiasts opt for a guided moose hunting package. You can expect a quality and adventure-filled experience at Wine Lake Camp. We offer a guide:hunter ratio of no more than 1:2. Our guides have 10 or more years of bowhunting, guiding and calling experience. References are available at your request. Each day you can participate in a morning hunt from 6 - 10 a.m. and an evening hunt from 4 - 8 p.m. Our guides specialize in vigorous hunting (hiking and stalking) and hunting from tree stands. Included in your moose-hunting package is the use of a sportboat with a trolling motor which allows you to quietly access the surrounding streams and river systems. 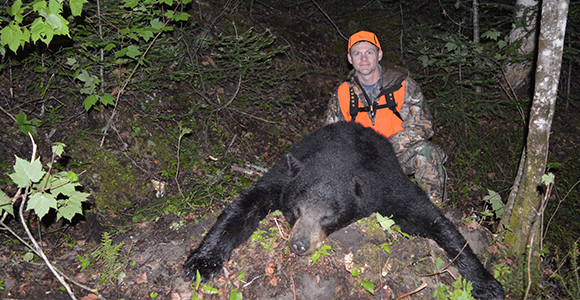 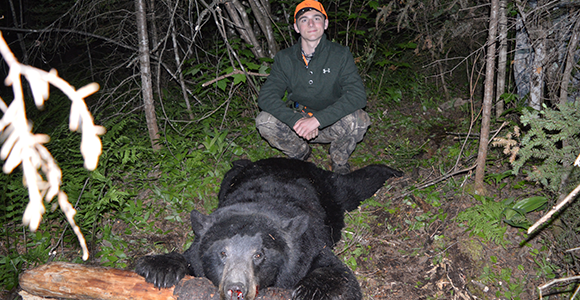 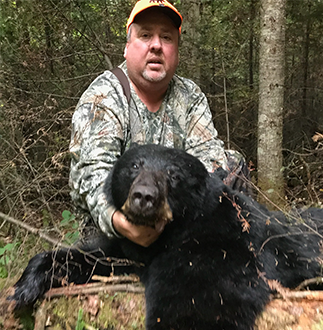 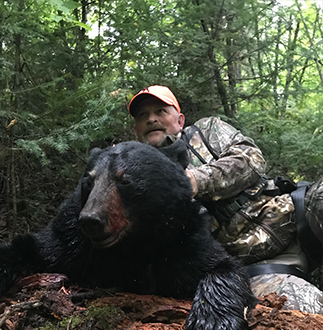